When I was growing up in the 90s, I remember wanting to get on the Internet. My parents weren’t going to help me, so I called up an ISP and said I wanted to set up an account. They asked for my name and I gave them a fake name. And then they asked for a credit card number and I told them I had to find my wallet and call them back.

I knew a few things about credit card numbers that I had learned from the book Big Secrets and some issues of 2600. American Express cards were always 15 digits and started with a 3 and Visa cards were 16 digits and started with a 4. The first couple digits are the issuing bank, and then the account number, and then they use something called the Luhn algorithm to produce the last digit, which is a checksum of the previous digits.

Remove the last digit, the check digit, and set it aside:

Now reverse the order of the digits:

Then multiple every other digit by 2, starting with the first digit:

Next, separate any double digit numbers into single digits:

Add them all together:

Divide by 10 and keep the remainder:

Subtract the remainder from 10:

This number is the check digit.

So I wrote a program to generate credit card numbers exactly as I just described, called them back and gave it to them along with a random expiration date in the future and they said, “Great, now we just need a phone number to call you back.”

Now I’m not sure what the first rule of credit card fraud is but it might be “Don’t give the person you’re defrauding your actual telephone number”. I said I had just moved and needed to look it up and I’d call them back. Then I walked to a payphone outside a convenience store, wrote down the number, called them back and gave it to them. They hung up, waited a few minutes, and called the payphone, which I answered. They asked me for a username, gave me a random password, and thanked me for my business.

The Internet was everything I had hoped it would be, for a couple weeks at least. But one day my username and password didn’t work. They obviously had tried billing the credit card and failed. So I generated a new credit card number, walked back to the convenience store and called them from the payphone and asked to set up a new account. It was going great until I gave them the payphone number, at which point they did not thank me for my business.

My payphone number had been blacklisted, but the great thing about living in a metropolitan area in the U.S. in the 90s is that there was always another payphone. I called them from a different one, set up a new account, and was back on the Internet.

For the next few months, this became a bit of a cat-and-mouse game with me and the ISP. I printed out a list of credit card numbers that I had generated and would carry them around with me. Whenever I saw a payphone, I would either call them to set up a new account or write down its location for future use. Sometimes I would get a representative that I had talked to before that would recognize my voice, other times they would insist on calling back the next day, which meant camping out at a payphone hoping it would ring. If I was with a friend, I’d have them do it for me, writing down what I wanted them to say.

I did eventually get more permanent Internet access, but the experience made me fond of payphones and what they provided for me when I needed them the most.

Last year, my daughter Aurora and I were walking around in Muir Woods and we came across this payphone.

Excitedly, I explained what it was and we took turns listening to the dial tone. I put some quarters in and called my cell phone to show her how it worked.

I recently moved into a new place and finally got to ditch Comcast for Sonic, which previously wasn’t in my coverage area. This has a few benefits. It’s a fiber line, so my upload speeds are better. For some reason, they continue to run a server that you can play door games on: 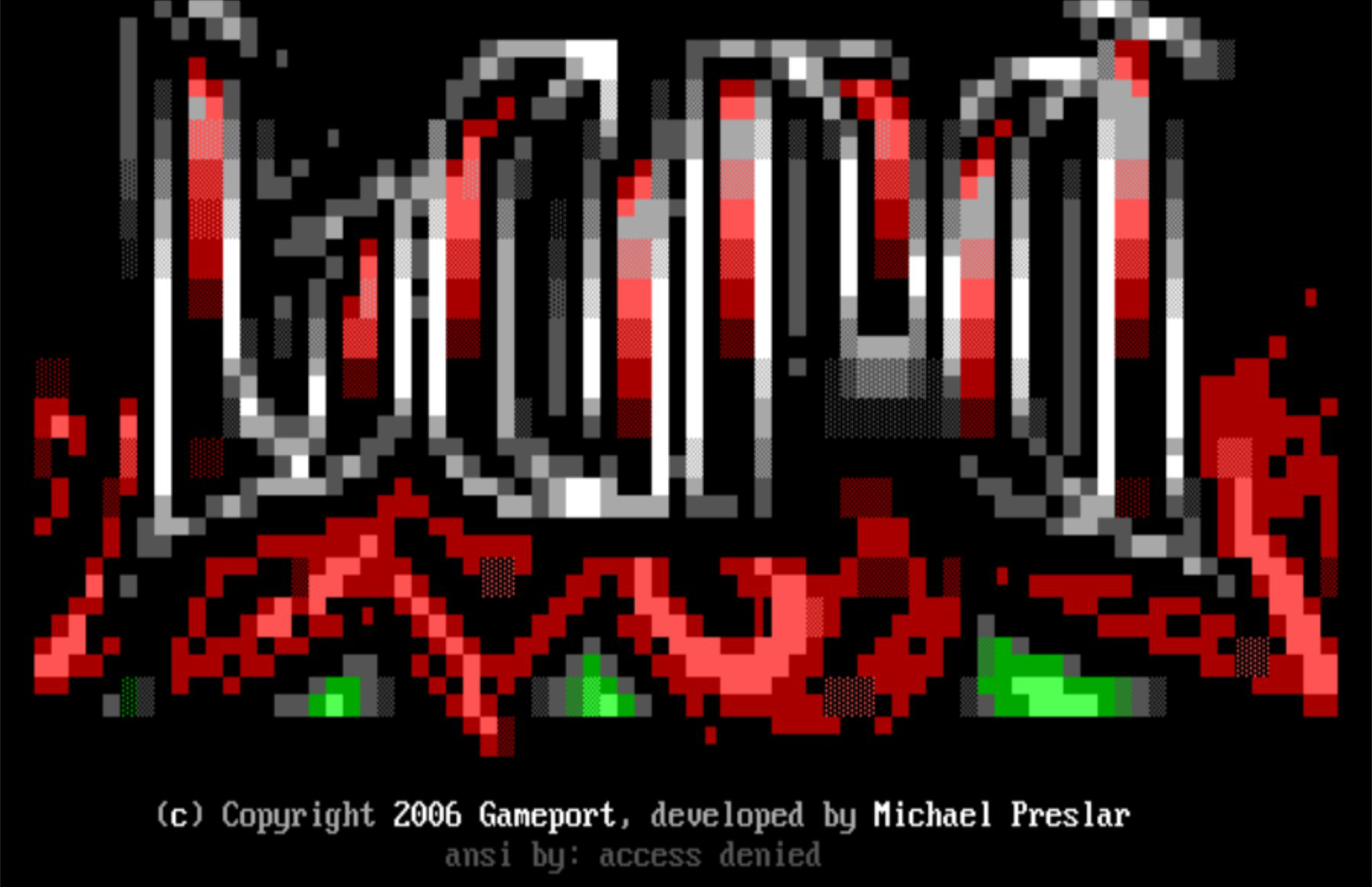 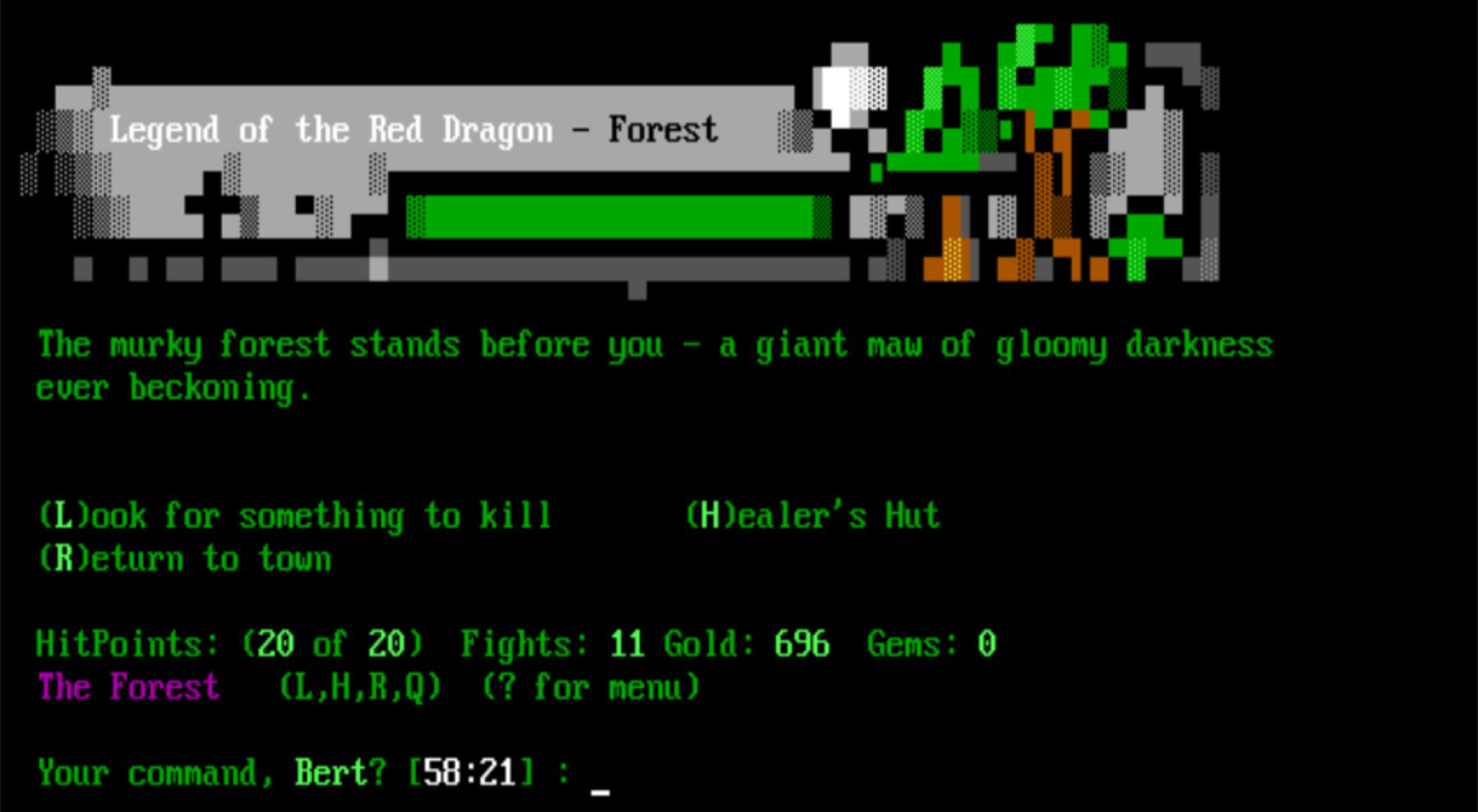 And last but not least, they include a landline with your service. At first I ignored it, but it gnawed at me. A telephone jack that worked and nothing to plug into it.

So I went on The Internet (I have permanent access now!) and I found a phone that I remembered from my childhood. 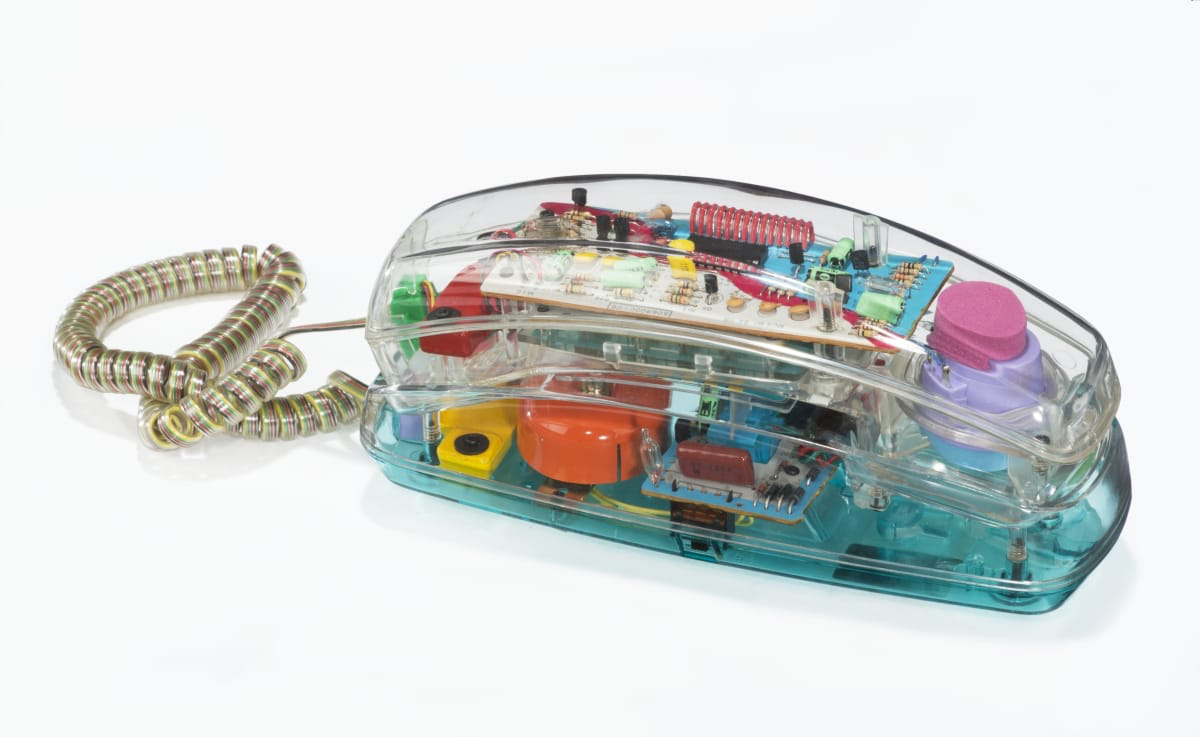 Apparently they made a lot of these - the one I found was new old stock, still in its original packaging. I plugged it in to the telephone jack and showed it to Aurora. I called it from my cell phone, it rang, and she picked it up and we talked for a bit.

But still, I wasn’t quite satisfied. Another idea emerged. 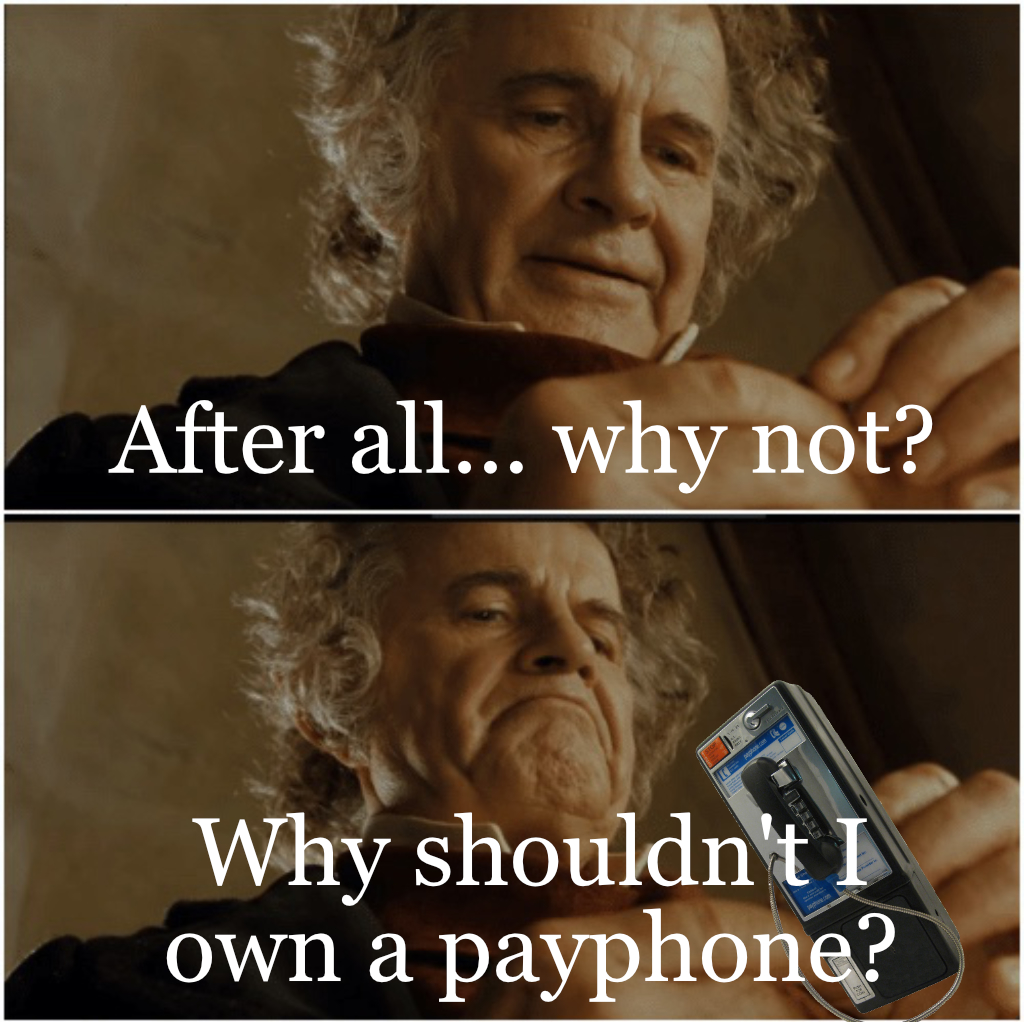 I started researching payphones. Perhaps the easiest, most obvious route would just be to buy a payphone from payphone.com:

Have you ever used a payphone and thought to yourself, “That would be a great novelty idea for the pool room, family room, or office. What a conversation piece”.

Why yes, payphone.com, yes I have.

But I didn’t like the fact that they just gave you a random payphone, so I started perusing Ebay. I found a seller that had a handful of payphones. They appear to use a potato to take photos of them, but I took a chance and ordered a Pacific Bell payphone. It arrived pretty quickly.

It didn’t smell so great. It had seen some shit (hopefully not literally) but the handset seemed to be in pretty good condition. I looked up the address printed on it and it had come out of a casino in Vegas, which probably explained why it appeared to have personally smoked a pack of cigarettes. I put it on my balcony to air out and that seemed to help.

I’ve never opened up a payphone before, but they had given me the keys and a T-key, so I turned the key and slowly lowered the front of it down. It met some resistance and I had to unplug this plug, which seemed to connect the electronics on the front to the back:

I also opened the coin box with the T-key, hoping to find a return on my investment, but it was empty and quite difficult to get back in. I’ll admit that I ended up using a hammer to get it back in, so any quarters I deposit into it may be there for a while.

After I determined that it worked by placing a few calls, I started trying to figure out how to mount it.

I ordered a mounting backplate from payphone.com, with the “phone mounting hardware” addon, which turned out to be 20 of these screws. I was scratching my head on how this was actually supposed to work - I could attach the mounting backplate to the wall but wasn’t sure how I would hold a 50lb payphone up while screwing it in to the backplate. What I quickly discovered is that I actually needed these mounting studs, so I had to order those separately and wait. The shipping cost for four studs was pretty frustrating, but I wasn’t sure that I could find the correct ones elsewhere. Once I had those, I could screw them onto the payphone and it would rest on the mounting backplate while I screwed in the other screws. The cover has to be off for you to screw in the remaining screws.

Next, I used a stud finder to detect a stud on the wall and traced the outline of where I wanted the mounting backplate to go. This was tricky because I wanted to run the RJ-11 cable behind the wall - I didn’t want it just hanging below the payphone, but I also wanted to mount the backplate directly to a stud for at least one of the screws. Here’s a good picture that I call “Measure once, cut three times”:

I believe I used one of these hole saw drill bits to cut the hole. I cut a similar hole below and used fish wire to run a RJ-11 cable through it.

Next, I used these 1/4” x 3” hex lag bolts to attach the mounting backplate to the stud, which felt pretty secure and I wasn’t worried about stripping the screw with my drill. At this weight, I probably could have used toggle bolt drywall anchors, but I was happy to be able to use the stud. I think it looks pretty good:

For the hole below, I went the easy route and used a RJ-11 Keystone Coupler so I could just plug the RJ-11 cable into it, snap it into a 1-Port keystone wall plate, and attach the wall plate over the hole. Then I ran a cable from that jack to the telephone jack that provided the landline and tried calling it. It worked!

At this point, I suppose I could have bought a telephone line splitter and hooked up the other phone so that both phones could make and receive calls and technically talk to each other. But there are a few problems with this:

This is when I discovered a crazy piece of technology, a phone line simulator.

This basically creates a closed network between two phones. You can configure it so that if you pick up one phone, the other phone rings, and when that phone picks up, you can talk, and vice-versa. So I bought one, drilled a hole to my daughter’s room, and ran another RJ-11 cable to her phone.

I’m not sure exactly what I was expecting, but at random hours in the day I’ll be working in my office and the payphone will ring and my daughter will tell me about her dolls for a minute or so and then I’ll say, “That’s great, but I have to get back to work.” and we’ll say goodbye until the next time. Most of the time, it’s a nice break.